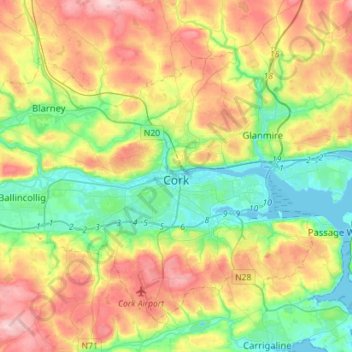 The climate of Cork, like the majority of Ireland, is mild oceanic (Cfb in the Köppen climate classification) and changeable with abundant rainfall and a lack of temperature extremes. Cork lies in plant Hardiness zone 9b. Met Éireann maintains a climatological weather station at Cork Airport, a few kilometres south of the city centre. The airport is at an altitude of 151 metres (495 ft) and temperatures can often differ by a few degrees between the airport and the rest of the city. There are also smaller synoptic weather stations at UCC and Clover Hill. Due to its position on the coast, Cork city is subject to occasional flooding.